Hutovo Blato is a nature reserve and bird reserve located in south Bosnia and Herzegovina, in a primarily karst ambiance, on the left side of river Neretva, featuring a unique sub Mediterranean swamp in Europe. It is composed of marshlands that were created by the underground aquifer system of the Krupa River. It is fed from the limestone massif of Ostrvo that divides the Deransko lake and Svitavsko lake.[1] The reserve is on the list of BirdLife International's Important Bird Areas.

Since the ancient times, this place is known as the green oasis, with an abundance of water that provides inhabitation conditions for a large number of plants and animals. It is the largest reserve of its kind in the region, in terms of both size and diversity. Hutovo is home to over 240 types of migratory birds and dozens that make their permanent home in the sub-Mediterranean wetlands surrounding Deransko Lake.[2] In the migration season, tens of thousands of birds fill the lake and its surroundings.

The swamp is interesting and important from ornithological, but also from ichthyologic, scientific, environmental and tourist point of view.

The valley along the last 30 km of the Neretva River, and the river itself, comprise a remarkable landscape. Downstream from the confluence of its tributaries, the Trebižat and Bregava rivers, the valley spreads into an alluvial fan covering 20,000 hectares. The upper valley, the 7,411 hectares in Bosnia and Herzegovina, is called Hutovo Blato.

The part of the park which kept its original form and almost untouched nature. Gornje Blato-Deransko lake is supplied by the karstic water sources of the Trebišnjica river, emerging in the proximity of the bordering hills. It is hydro-geologically connected to the Neretva river through its effluent, the Krupa river, formed out of 5 lakes (Škrka, Deranja, Jelim, Orah, Drijen) and by large portions permanently flooded, also isolated by wide groves of reedbebds and trees, thus representing the most interesting preserved area.[3]

The Krupa River is the Neretva left tributary and the main water current of Hutovo Blato, which leads the waters from Gornje Blato and Svitavsko lake into the Neretva river. The length of Krupa river is 9 km with an average depth of 5 meters. The Krupa river does not have an actual source, but is actually an arm of Deransko lake. Also, the Krupa river is a unique river in Europe, because the river flows both ways. It flows ‘normally’ from the ‘source’ to the mouth and from the mouth to the ‘source’. This happens when, due to high water level and large quantity of water, river Neretva pushes the Krupa river in opposite direction .[4]

Since 1995, Hutovo Blato has been protected as a Nature Park "Hutovo Blato"[5][6] and managed by a public authority. The whole zone is well protected from human impact and functions as an important habitat for many plants and animals .[7] Historical site, Old Fortress Hutovo Blato, is located in the area of Nature Park. Nature Park “Hutovo Blato” is located in the South-Western part of Bosnia and Herzegovina, 30 km from City of Mostar and near the Croatian border. It stretches over an area of about 7,411 ha and represents the one of the richest wetland reserves in Europe. Until 1995, when the cantonal protected area was founded, Hutovo Blato represented well-known area mainly for its hunting and fishing tourism. Every winter over 200 species of birds find their shelter inside this untouched nature.[8] Visitors can enjoy relaxation, recreational activities in nature, sport-fishing, cycling and main tourist attraction – photo safari. There is also an educational path providing information of park and for rising environmental awareness and need for preservation of natural heritage in Nature park “Hutovo Blato”.

Neretva Delta has been recognised as a Ramsar site since 1992, and Hutovo Blato since 2001. Both areas form one integrated Ramsar site that is a natural entity divided by the state border.[9] The Important Bird Areas programme, conducted by Birdlife International, covers protected areas in Croatia and Bosnia and Herzegovina.[7]

Through rivers Krupa and Neretva, water currents of Hutovo Blato are connected to the Adriatic Sea, therefore some migratory species that inhabit salty waters also come to Hutovo Blato and adjust to plain water conditions, among which the most well known are Anguilla anguilla, Linnaeus, 1758; Mugil cephalus, Linnaeus, 1758; etc. 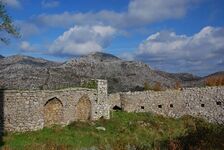 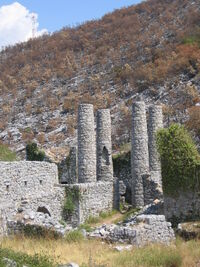 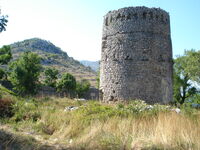 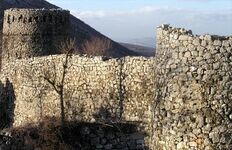 Wall and the Citadel of Hadžibegov Fort

After intense excavations in the area of Hutovo Blato in the autumn of 2008, archaeologists from the University of Mostar (Bosnia and Herzegovina) and the University of Lund (Sweden) found the very first traces of an Illyrian trading post, thought to be more than two thousand years old. The find is unique in a European perspective and the archaeologists have concluded that Desilo, as the location is called, was an important trading post and a site of significant contact between the Illyrians and the Romans. Surprisingly large finds have been made in a short period of time. The archaeologists have discovered the ruins of a settlement, the remains of a harbour that probably functioned as a trading post, as well as many sunken boats, fully-laden with wine pitchers – so-called amphorae – from the 1st century B.C.[10] The archaeologist Adam Lindhagen, who holds a PhD from the University of Lund and has specialised in Roman wine amphorae, says that this is the most important find of all time from the Illyrian areas.[11][12]

Community content is available under CC-BY-SA unless otherwise noted.
Advertisement